Genevieve Nnaji In New Teaser Trailer For ‘Road To Yesterday’

T.E.N (The Entertainment Network) producers of the feature film ‘Road to Yesterday’ are pleased to announce that the highly-anticipated film will be released in all Nigerian cinemas on Friday, the 27th of November 2015.

Set in Lagos Nigeria, Road to Yesterday is an epic love story, about a couple desperate to mend its marriage on a road trip to a relative’s funeral. However when memories and secrets from the past are revealed, a lot more is at stake than their relationship.  Road to Yesterday is set to resonate with movie-goers nationwide.

Genevieve Nnaji, stars as ‘Victoria Izu’ the conflicted wife and mother. Ms. Nnaji is the Quintessential Nollywood Star, with a stellar resume that includes both national and global accolades. With past credits such as ‘Half of A Yellow Sun’, ‘Tango With Me’ & “Ije”, Ms. Nnaji returns to the screen with her first feature film in over two years. 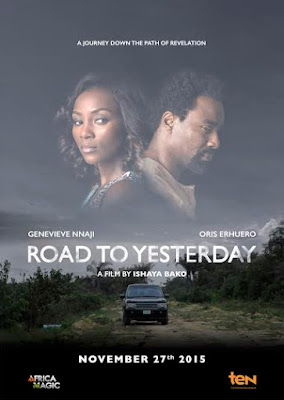 The original screenplay was written and directed by Ishaya Bako, a London Film School Alumni, and creator of a series of highly acclaimed festival favourites including the award winning “Braids on a Bald Head” – Best Short Film at the 2012 AMAA Awards. Road to Yesterday is Bako’s feature directorial debut.

Road to Yesterday was shot in various locations across Lagos. Its proudly Nigerian cast and crew celebrate the depth of local talent. With the support of AfricaMagic, the technical quality of the Film demonstrates that it is possible to make a high quality production in Nigeria with the appropriate budget and technical input.

The Nigerian Premiere is set for Wednesday 18thNovember 2015 in Lagos, Nigeria.