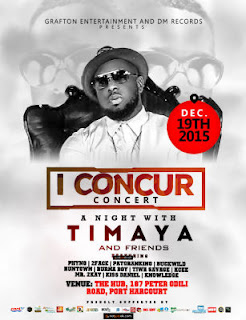 Come December 19, 2015, in the city of Port Harcourt, Grafton Entertainment in conjunction with DM Records will be hosting, for the very first time, Timaya and Friends in a concert tagged – ‘I Concur’.

The ‘I Concur’ concert title was drawn from Timaya’s song, “I Concur” featuring Don Jazzy and will hold at a brand new venue called ‘The HUB’, located at Peter Odili Road, Port Harcourt, It will be opening for the first time on that day. A state of art 3,000 capacity venue. The concert shall see the Egberi 1 of Bayelsa live on stage in his city of alma mater, performing with other top Nigerian artistes including, 2Face Idibia, Tiwa Savage, Kcee, Mr 2Kay, Patoranking, Burna Boy, Kiss Daniel, Phyno, Run Town, Bukwild, Knowledge and many others.
Speaking on the concert, Timaya said, “This concert means a lot to me. I have been doing shows in PH City, but this one will be different because it is my own concert and if you look at it, I could have done it in Lagos, but me and my guys at Grafton thought it would be a honour to have this party for my people in Port Harcourt. They held me down from the beginning, so, this is a special home coming for me; and I’m not coming alone. My friends are coming to support me live on stage. I can’t wait!”
The ‘I Concur’ concert will be managed by Grafton Entertainment and DM Records.
Talks about the show have been officially opened on social media with the hashtag #TimayaIConcurConcert
For sponsorship and enquiries, contact: 08107778658.
Entertainment NEWS