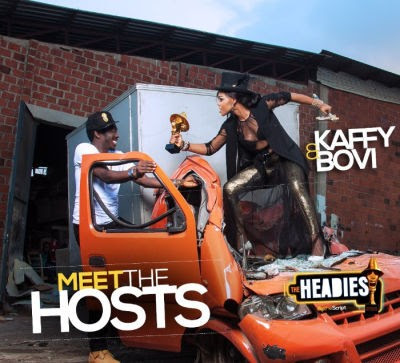 The Headies has always had the dopest personalities host the Awards. Since the first edition in 2006, with Darey Art Alade hosting solo, each year has had hosts step up their game with outstanding persona, glamorous outfits and top notch delivery.

The hosts of the second edition in 2007 were Tana Adelana and D’Banj. The theme of that year was “The Best Gets Better” and it got better with highlights of D’Banj showing up on stage in a towel.In 2008, actress Dakore and comedian Basketmouth hosted the Awards.In 2009, the hosts were Kemi Adetiba and Banky W. The awards left Lagos for the first time and was held at the International Conference Centre, Abuja. By 2010, there was no host as the “Voice of god”, a voice-over character spearheaded and compered the Awards.
In 2011, The Headies brought actress Rita Dominic and rap artiste, eLDee to host the awards at The Convention Centre, Eko Hotel and Suites. The year 2012, saw another Nigerian rapper host the Awards when M.I. Abaga was paired with another music industry colleague, Omawumi. Year 2013 had Mavin label mates, Dr. SID and Tiwa Savage host the Awards at Oriental Hotel, Victoria Island. Last year (2104), the hosts were Toke Makinwa and Basketmouth. Making Basketmouth the only personality that has hosted the awards twice.
This year, the hosts are Kaffy and Bovi, a perfect blend of standup comedy and contemporary dance. The hosts are well established in their industrys’ and are not expected to follow traditions this year, leaving room for a lot of spontaneity and surprise! The theme of this year’s award is “Flip The Script”, and who else than these two to bring this and more experiences to fans and guests at the awards.
See you at the Awards on December 30, 2015, at the Landmark Events Centre, Lagos.