Olamide To Shut Down Lagos with #OLIC2 on Dec. 27 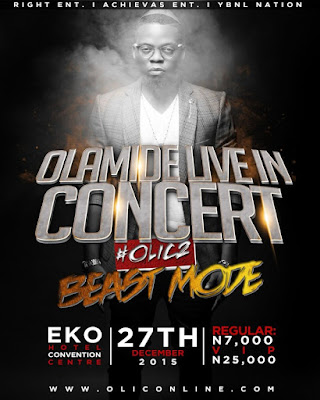 After one of the most epic years ever recorded by a Nigerian recording artiste, YBNL front man Olamide is set to wrap up his wildly successful 2015 with the second edition of his flagship mega concert Olamide Live In Concert on 27 December, 2015 at the Eko Convention Centre, Eko Hotels & Suites, Victoria Island, Lagos.
Olamide 3Tagged OLIC 2: Beast Mode Unleashed, the show brings Olamide to the fore in one frenetic night of entertainment alongside the entire YBNL family at the end of a year that has seen the squad drop hit after hit from Olamide, Lil Kesh, Viktoh, Adekunle Gold and Pepe.

“It’s not often that you see an artiste as consistent and committed to his art as Olamide and this year has been the biggest proof of that. He has become arguably the biggest contemporary artiste in Nigeria currently, and #OLIC2 is a rare opportunity to see him onstage for an extended performance all night alongside artistes he has collaborated with and surprise performers. It promises to be one of the biggest nights of the year and I personally am looking forward to seeing the show live.”