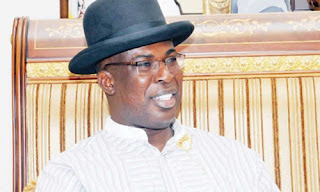 The All Progressives Congress candidate in the Bayelsa State inconclusive governorship election, Chief Timipre Sylva, has denied the existence of any friction between him and President Muhammadu Buhari.


An online news medium on Monday reported that Sylva confirmed the existence of differences between him and President Buhari, which resulted in the latter not purportedly supporting his governorship ambition.
But in a statement issued on Tuesday by his media aide, Doifie Buokoribo, Mr. Sylva dissociated himself from the report, saying he never granted such interview to any news medium and never made the comments attributed to him by the strange “news” outlet.
The statement said, “Sylva distances himself from the falsehood being vended by the authors of the strange report. He has neither granted such interview to any news medium nor made the comments attributed to him either privately or publicly.
“Sylva holds President Muhammadu Buhariin high esteem, and he is on the same page with his party, APC, in his bid to become the next governor of Bayelsa State, come 14 February 2016. The party has given him the highest support in the governorship contest and has continued to work closely with him in the final push to overcome the few tenuous and fleeting obstacles being erected by enemies of Bayelsa State on the people’s path to freedom.
“The same elements that authored this outlandish report were the people who only recently alleged that some serving ministers were plotting to rig election for Sylva. Their anxiety and confusion are understandable, considering their imminent fall from power.  But they must understand that there is a limit to propaganda, and that election is not won the basis of propaganda, as the recent presidential election in the country has shown. Propaganda cannot fetch them the governorship of Bayelsa State.
“Buhari overcome a similar propaganda as the one being sown about Sylva. Sylva, too, will soon overcome. We will win, by the grace of God”.
NEWS POLITICS