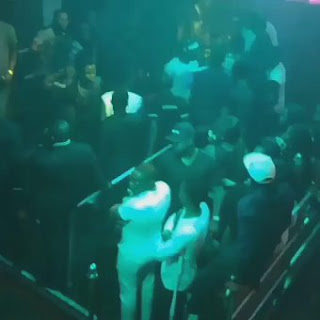 Yesterday night at Quilox club in lagos was full of battle as the battle or beef continues with Wizkid and Drammy
krane.

Just when we thought the beef was over, Nigerian music stars Wizkid and Dammy Krane decided to flex their muscle at Quilox Club, Lagos, during Obafemi Martins’ exclusive ‘all black party.’ An eye witness account first told theNet, Dammy Krane was chilling at the VIP section with Teckno, when Wizkid came in with his Surulere goons around 4am. According to the source, ‘When Wizkid entered the club,it seemed he saw Dammy Krane but didn’t go to meet him, then about 15 minutes later, it seemed Dammy was showing him some attitude, then Wizkid went to meet him. The next thing we saw everywhere had scattered. Wizkid was alleged to have picked up a Remy Martins bottle and smashed it to Dammy’s head before bouncers separated them. With a bloodied head, Dammy tried fighting back but he was held back by people. Wizkid moved to another VIP section and Dammy tried to go and meet him there to get his revenge. Once again, he was prevented. 2face and Timaya later stepped in to settle the rift but Wizkid walked away, with a vow that he’d still deal with Dammy… Multiple eye witnesses say Wizkid clearly attacked first before bouncers tried to separate them. Then the club owner Shina Peller waded into the fight as well. It is not clear if Dammy Krane was injured. ‘He took them to his office to settle it’, a guest told Net. We learn that both parties then came downstairs, back to the club and acted as if nothing happened. But in a swift reaction to the rumors spread about the whole incident, media personality, Osi Suave who was at the club said “no one broke a bottle” just a cup thrown that resulted in a bust lip. Wondering why blogs spread false stories. Stars like 2face Idibia,Timaya, Tekno, Sexy Steel,Skuki, Special Ed and many more were in attendance at the exclusive ‘all black party’ organized by Nigerian soccer star Obafemi Martins.