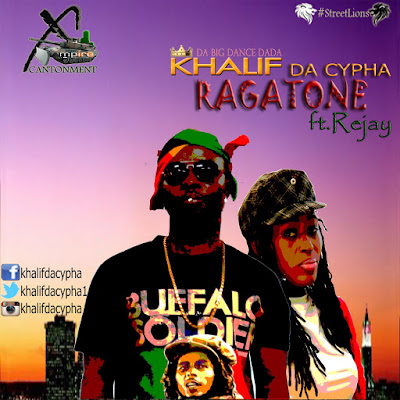 Douye Michael Igarando aka Khalif Da Cypha a Nigerian Reggae/Dancehall artist. The X-mpire Cantonment Soldier always  lives up to his title Da big Dance DaDa, Dancehall Field Marshal as he drops massive songs for the dancehalls. This is his first Official Single for 2016 after "The Oracle"  album which made so much buzz on iTunes in 2015. This time He Teams up with Right Music first Lady Rejay the Afro-Jazz icon on this Song Titled "Ragatone" which was produced by MashMella, mixed and mastered by Abiri the Hit Producer. All work and no play makes Jack a dull boy that's why khalif came up with this massive Carribean tune to rock the dancehall world over. Trust me its a song for every DJ's playlist so download and let the party begin. Gagaam.