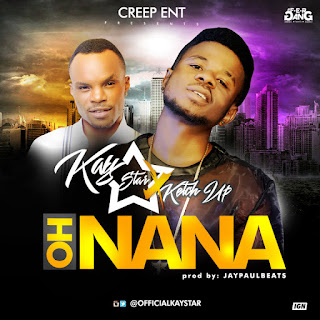 “When talent meets its kind, a JAM is sure to be made! K-Square (Kaystar and Ketchup) join forces on this massive dancehall/rap number termed – “Oh Na Na”, produced by JayPaul Beats and published by Gusto Entertainment.
The hood acclaimed street “god” is out with a new banger which he calls OH NA NA, the track is a fusion of rap and dancehall. Kudus Adeyemi stage nameKaystar teams up with Ragga dance hall artiste Ketchup to bring this sensational tune.
Kaystar who hails from Ogun state is known to many as a rap idol, because of articulate blend of Yoruba and English language in his songs. Taking it up by a notch Kaystar dropped a mix tape in the end of 2015, and this new single is definitely a great follow up. 2016 is going to be a great year for the artiste as he is expected to drop more singles and visuals”