Doom for Buhari's Government, If Jonathan Is Arrested 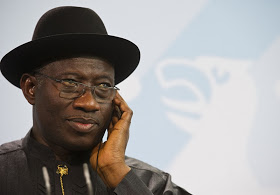 Reports from Punch said the umbrella body of Ijaw youths, the Ijaw Youth Council Worldwide, has alleged that the Economic and Financial Crimes Commission is laying a foundation for the arrest of former President Goodluck Jonathan.

The IYC, however, advised the anti-graft agency to shelve any plan to “persecute” the former President, insisting that such a move would spell doom for the Muhammadu Buhari administration.
Speaking at a news conference on Saturday to mark the burial of a former Bayelsa State Governor, Chief Diepreye Alamieyeseigha, the IYC President, Mr. Udengs Eradiri, said most of the close allies of Jonathan had been arrested by the EFCC.
He particularly condemned the recent arrest and detention of Jonathan’s cousin and contractor, Mr. Robert Azibaola, over an alleged $40m contract fraud.
Eradiri said Ijaw youths would not allow Azibaola, Jonathan or any rising Ijaw leader to be persecuted by the EFCC, the way the Federal Government dealt with the late Alamieyeseigha.
He said, “They have arrested almost all our people. Azibaola was arrested by the EFCC and we are calling on the EFCC to stop persecuting him further and charge him to court if there are issues.
“They detained him for a long time, forcing him to make statements to indict former President Jonathan. Azibaola is a businessman, a contractor, and has the right, like every other Nigerian, to get contracts. Why will the Niger Delta case be a different one?
“We noticed that the same way they persecuted Alamieyeseigha has continued. After Goodluck Jonathan, our people who contributed to that administration, are being persecuted by this government.
“The recent one is the ploy to arrest Goodluck Jonathan, which is unfolding every day. This must stop. Goodluck Jonathan is the most performing President that Nigeria has ever had. We are proud of him.
“Everyday, there is a calculated attempt to whittle down the achievements of former President Jonathan. We call on Nigerians to mount pressure on the government to focus on leading Nigeria right rather than looking for ways to bring down the achievements of Jonathan.
“Buhari should please focus on governance rather than persecution of people who have added value. We are not happy about it and today, we use Alamieyeseigha’s death as a point of contact. The world has seen that from Alamieyeseigha, it has trickled down to all the Niger Delta people.”
Speaking on the alleged removal of 10 per cent community equity from the new Petroleum Industry Bill, Eradiri asked the government to do the needful.
He added that the Federal Government ought to have known that community ownership would ameliorate the years of crises in the Niger Delta region.
The IYC President added, “For us, we will not beg for it. We will not even lobby anybody. The oil is our oil and we will take it. If they like, they should put it, if they don’t like, they should leave it. We expect that this country should have commonsense by including community participation.
“In the issue of pipeline surveillance, this 10 per cent would have covered pipeline surveillance. Once the people know that they have 10 per cent in this business, they will protect it.”