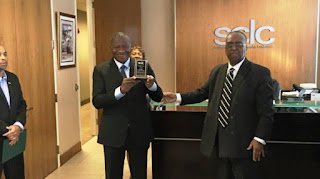 Former President Goodluck Jonathan was awarded in the US on Thursday for his leadership in human rights in Africa’s most populous nation, Nigeria.

Jonathan, who was awarded in recognition of his leadership in “human rights, social justice and universal fight for freedom”, becomes the first African leader to be so honoured.


The presidential award was presented by the Southern Christian Leadership Conference, founded by the late American human rights activist, Martin Luther King Jr, best known for his human rights struggles and the I-have-a-dream speech.
In statement on Friday, the former president expressed his pleasure in being so honoured and also meeting the sister of the famous human rights activist.
“I thank Dr. Charles Steele Jr, President of the Southern Christian Leadership Conference in Atlanta, Georgia, and the executive of the SCLC for honoring me today,” he said. 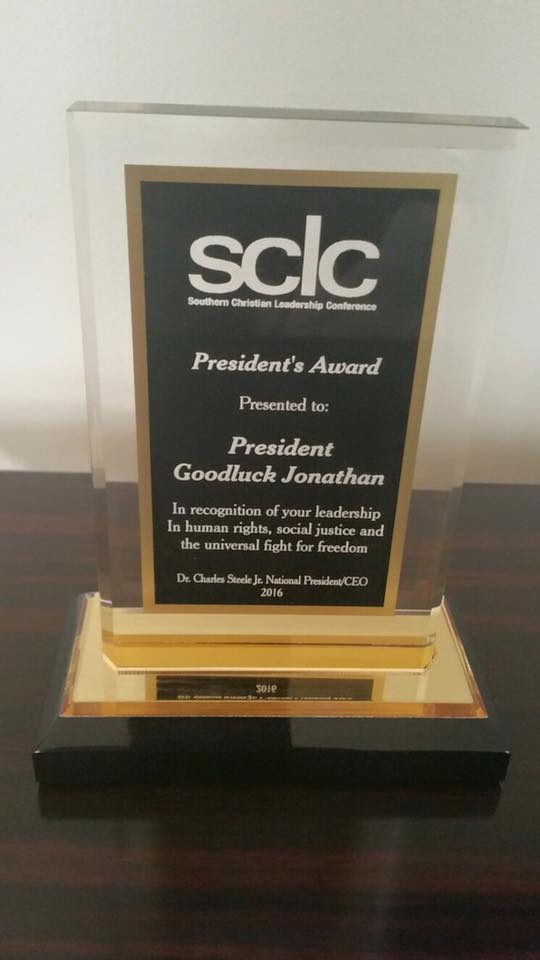 “It was also a pleasure to meet Naomi King, the sister of the late American Civil Rights leader and founder of the SCLC, Dr. Martin Luther King Jr, who was kind enough to attend the event and identify with the goals and aspirations of the Goodluck Jonathan Foundation.
“By this award, I am further inspired to continue to work for the advancement of democracy, peace and progress in Nigeria and Africa.”
Jonathan is billed to be in the US for the 2016 Hope Global Forums conference, where he is expected to Succeed the 42nd president of the US, Bill Clinton as keynote speaker.
In the letter sent to Jonathan in December 2015, he was invited to join the biggest 500 companies in the world in their promotion of King’s human right ideals.
“We invite you to join Fortune 500 CEO’s, private investors, financial leaders and government officials to connect and collaborate on this vision,” the letter had read.
“With the theme ‘Reimagining the Global Economy: Inclusive Economics’, the annual meeting is set against the backdrop of the Martin Luther King Holiday weekend and gathers leaders from government, community and the private sector to outline a vision for the modern global economy.”
Jonathan was earlier in Florida to welcome his second grandchild, delivered by his adopted daughter, Inebharapu Paul.
Follow us on twitter @thecableng

Copyright 2016 TheCable. Permission to use quotations from this article is granted subject to appropriate credit being given to w
NEWS POLITICS