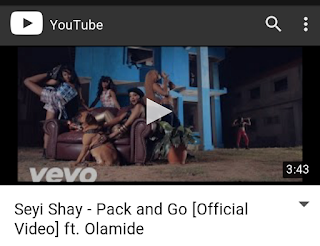 Raving songstress Seyi Shay releases the visuals to her smash single “Pack and Go” featuring Olamide off the album “Seyi or Shay“.
This is her second video released in 2016, it was shot by prolific video director Meji Alabi for J Films in Lagos with captivating visuals, amazing props and costumes.
Possibly one of the biggest collaborations in 2016, the two heavyweights team up to make the street anthem Pack and Go, a song which condemns horrible acts such as infidelity & domestic violence. Seyi Shay comes out showing her more localized self that we definitely do not see everyday & Olamide puts off a show with his playful lyrics and streetwise slangs that make him everything fans love and adore.