President Muhammadu Buhari has given a fresh order to the military to crack down on a new militant group, the Niger Delta Avengers, which has been attacking oil installations.


SUNDAY PUNCH gathered on Saturday that the President gave the directive on Friday, following the group’s attack on Chevron’s platform in Warri, Delta State, on Thursday and its blowing up of pipelines linking Warri and Kaduna refineries on Friday.
Following the attack on the Okan offshore production platform on Wednesday by the militants, Chevron said it had lost about 105,000 barrels of oil production in three days.
The oil major said the incident had affected about 35,000 barrels per day of its own net crude production, or about 15 per cent of its output in the country. 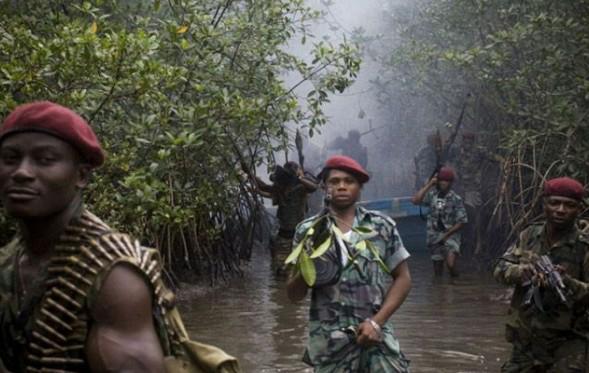 “Approximately 35,000 bpd of Chevron’s net crude oil production in Nigeria are impacted,” AFP quoted a Chevron’s spokeswoman, Isabel Ordonez, as saying in a statement.
The General Manager, Policy, Government and Public Affairs, Chevron Nigeria Limited, Mr. Deji Haastrup, confirmed the figure.
He said, “This is a very difficult time for the country because it needs the revenue it can get from oil production. Incidents such as this have the potential to impact that. We do hope that it does not seriously affect the country.”
Workers on the pipelines told one of our correspondents that before the attack, they had pumped 28,000 barrels from the Escravos terminal on Thursday.
“Both Warri and Kaduna refineries also got a delivery rate of 903,000 barrels just before the attacks,” the workers who spoke on condition of anonymity said.
The workers said following the attacks, they counted about 10 military air patrols over the pipelines on Saturday.
They also added that it had been difficult for fire fighters to quench the fire from the bombed pipelines.
“The fire is still on and it’s going to be hard to stop it because it’s huge,” the workers said on Saturday night.
It was learnt that following the attacks, which has the potential of adversely affecting the revenue of the country, the President instructed the Nigerian Army, the Nigerian Navy and the Nigerian Air Force to stop the activities of the new group.
A presidential aide, who spoke on condition of anonymity, said, “The President gave special instruction to the military, especially to the Chief of Naval Staff, that this ugly development of vandals in the Niger Delta should end immediately.”
It was learnt that the President also ordered the Chief of Naval Staff, Rear Admiral Ibok-Ete Ekwe Ibas, to ensure that all waterways and platforms were protected against further attacks by the militants.
The Acting Director, Defence Information, Brig. -Gen. Rabe Abubakar, in an interview with one of our correspondents on Saturday, confirmed that the military had gotten the directive.
He said, “We have the order from the President and we are monitoring the activities of the new group. All efforts will be made to bring out those behind it.
“The suspects who perpetrated the first vandalism were apprehended and paraded the day before yesterday (Thursday).
“These ones are not going to be different. We are going out on our operation to stop and apprehend them in accordance with the presidential directive.”
Abubakar was not specific about what measures would be taken to address the current situation.
“We are not deterred; nobody is happy about it but we are not deterred from doing what we are doing. And more proactive measures would be put in place.
“What they are doing is complete economic sabotage; it is economic terrorism,” he said.
Buhari had in April threatened that his administration would descend heavily on oil and gas pipelines vandals as well as other saboteurs the same way the nation’s Armed Forces were dealing with members of the Boko Haram sect.

The President who spoke in Beijing during a meeting he had with members of the Nigerian community in China, warned vandals and saboteurs blowing up oil and gas installations in Nigeria.
NEWS POLITICS