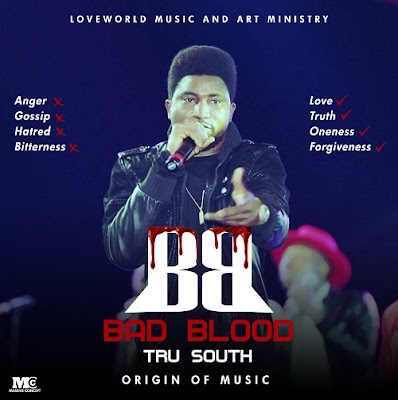 Tru South The Rap Evangelist A.K.A That Rapper in A white Suit . One of BLW RAP NATION’s heavy weight and the Grand Commander of HolyGhostGang Drops his much Anticipated Song “Bad Blood” Today.


TSK as many call him is widely known for his Musical depth , Spiritual lyrical Content ,Clever & Edifying Rhymes and Punchlines , The song “Bad Blood ” Features New Holyghost Gang Rapper PEDDYGREE Produced by Reknowned hit Maker , the BLW Producer Of the Year Kelly Lyon’s Spiritual Beatz Team ..”BAD BLOOD “Urges us as Christians to let Go of Anger ,Pride , selfishness , hatred , Gossips, unforgiveness and all works of the flesh .Cos Our Lord and Saviour Jesus isn’t coming Back for any one who still keep Such things in their hearts.
Tru South – This song is a message to me first ,then to the Rest of the world … Me and You we have to check ourselves and make sure we don’t allow the flesh consume us .Lets give more time to Gods word so we dont copy the world .
If you offend someone drop your ego and make peace .. If someone offends you and they don’t come to make peace …Then forgive them all the same

How can we win Sinners over if they Dont see Gods love working amongst us.
Let the Bad Blood Go
Bad Belle Is NOT allowed