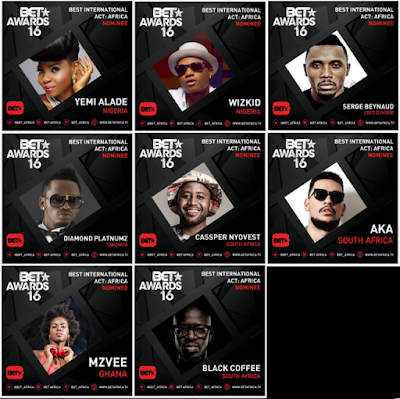 BET have released the nominations for the 2016 BET awards to be held at the Microsoft Center, Los Angeles. Drake dominated the nomination in the main categories with nine nominations while we had Wizkid and Yemi Alade leading the Nigerian party against the rest of Africa for the coveted and controversial BET Best International Act Africa category.
It would be noted that several african artists voiced their discontent at how the African category is being treated over the years with Wizkid, Yemi Alade and Fuse ODG voicing out on Social media last year.


Despite this, the duo of Wizkid and Yemi have been nominated again and it is unknown wether they will choose to accept the award (if they win) hours before the main show as per tradition or even show up for the pre shows.
A.K.A, Cassper Nyovest and Black Coffeelead the South african party while MzVeefrom Ghana, Diamond Platinumz of Tanzania and Serge Beynaud from Cote D’voire make up the list.