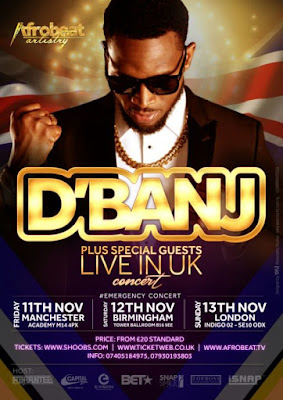 D’banj has announced a string of concerts today in the UK. The highly-anticipated #EMERGENCY concerts promoted by Afrobeat Artistry will kick off in Manchester on November 11, Birmingham on November 12 and ending in London at the world renowned – IndigO2 on November 13. After a four-year-hiatus from the UK, D’banj is set to give fans a star-studded performance, performing new and old songs.


The event will be supported by man of the moment – Tekno, who will take to the stage to perform his hits such as ‘Duro’ and the latest ‘Pana’, alongside many more special guests. And hosted by Capital Xtra’s DJ Abrantee.