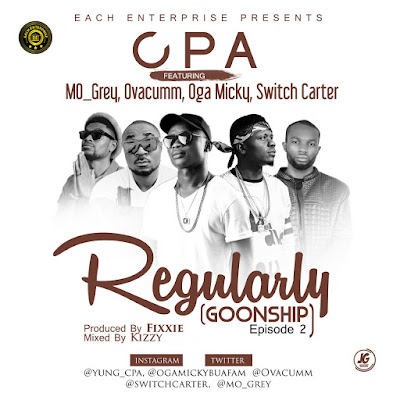 Barely a month after the release of its PILOT episode, CPA brings us the EPISODE 2 of the #REGULARLY series which he titles, "GOONSHIP" featuring some of the dopest rapppers from the south east and south south regions of the country who are also his GOONS. we have OVACUMM, OGAMICKY, SWITCH CARTER AND MO_GREY all on this version. You can't help but get excited with the combination.

REGULARLY (GOONSHIP) Ep 2 is about the greatest synergy of the underground. With more synergies such as this in the rap scene, Rappers would most likely restore their already faded relevance in the NIGERIAN MUSIC INDUSTRY.