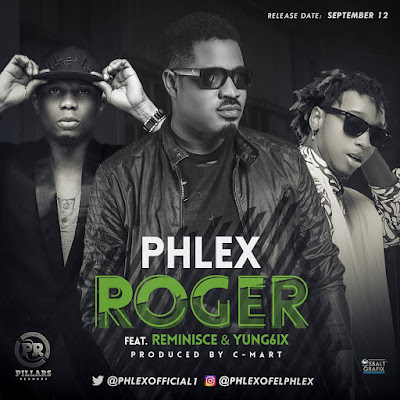 After a long music break from the duo “El Phlex”, one half of the duo of music brothers, Ariyo Adeniyi popularly known as Phlex has decided to establish himself as a solo artist.


The one time NEA Awards nominees famous for their song “Aiye Mi” featuring Oritse Femi, have however not announced any break up, but news making the rounds is that the other half Ariyo Oluwaseun known as Elshawn is currently in the United States of America, furthering his Education.
Phlex is a singer, song writer and rapper. Phlex is focused on his music right now and is currently working on a solo project to be released sometime very soon.
Phlex hasn’t wasted much time in moving on with his music regardless, on this new song titled: ROGER (A common slang on streets of Lagos and Nigeria in general, meaning money), which is the first single off is forthcoming project; Phlex takes it all to the streets. A song that brags about street credibility, a huge street followership and a pocket full of cash.
Phlex gets the assistance of “2 Kings” on this song, Reminisce who is unarguable the King of the streets aka Alaga Ibile, the rapper who just dropped his fourth album: “EL Hadj” easily flossed on the drum rolling beat,delivering an ear catchy, street laced and yet catchy verse on the theme of the song.
The second “King” featured on this song is the acclaimed king of the south: Yung6ix, also dropped punch lines on punch lines like he’s known for, making references to stories making the rounds of him almost getting shot:“I heard the N*ggatried to drop me like my new single”, “Like the walls of Jericho, they pray for me to fall”. Both rappers easily complemented the effort of Phlexwho easily aced and delivered a very catchy hook. Also the chant on the beat reminiscent of that from the southern part of Africa, adds a lovely flavour of sound to the song.
Phlex on his verse talks about his journey from nothing to the lime light flosses about his street credibility “an omo ita that machetes the beat” and monetary status and how he should be respected. The video for this street banger has also been shot; it will hit the airwaves very soon. For now enjoy the song.