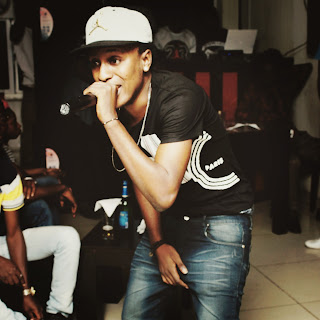 Agosu Samuel Babatunde popularly known has Samiyo is a musician, a song writer, entertainer and a guitarist from nigeria. He also plays more musical instruments like piano, drum set, flutes etc. he is an RnB, Pop artiste. Samiyo is musically wild to the extends of him doing and touches different kinds of genres from RnB, Pop, jazz, reggae, soul music, country music, afro pop, high life etc. He started his career from his own father's church which is  the shepherd of the church.
> Samiyo started has a drummer which he plays drum set at the age of seven in the church for a while then later develops interest in playing other musical instruments like guitar, piano flutes and others etc. All those period Samiyo was a secret singer which he sings to himself privately whenever he is alone, Not until the day they have a choir practice in the church while working on an acapella song which needed to be harmonize with more voices so they had to instruct all the instrumentalist to come join singing at that moment, that's how uncle kayode their choir coordinator discover the glorious voice coming from the little boy Agosu Samuel Babatunde (samiyo)then. That was how his singing career started from one concert to another.
> In year 2012 Samiyo won a competition titled "Discover the real voice" organise by Mr Calvin in surulere lagos nigeria.
> That same year he started recording his own songs he works with producers like Jay sleek, Wazbeats and mixing engineer like Foster Zeeno etc.
> In year 2013 Samiyo had songs like "caress me" produced by Saint uzi which enjoys radio airplays across the country, in that same year he started developing publicity after performing in clubs, events, shows which makes him features in some artistes songs like "mayi" by dakuz, "ju si le" by femzy which enjoys radio airplays and "juru" by an american based artiste named joe Black which enjoys radio airplays in the U.S and nigeria has well etc. Then he attracts the attentions of a record label called Effizy entertainment which he signed a year deal with them.
> In year 2014 he had songs like "I bleed your love", Girl oh" both produced by Saint uzi. The song "girl oh" enjoys a massive radio airplay too which really gave him a large fan Base and more recognition. That same year he draws the attention of a label named crispent entertainment which he had a year management deal with them too.
> In year 2015 he was featured on a song titled "Finally" by Leesym which still have artistes like leke Anthony, Larivo on the song produced by Xbeat.
> And the year was still all about shows here and there which makes him have a strong brotherly relationships with his senior colleagues in the industry, people  like "buchi da comedian, "Igos of wazobia fm" a presenter and comedian etc. Which they love his songs and always support him in there own way all times.
> He later had a deal with the fast rising popular Nigeria actress "Sandra Alhassan"
> Samiyo did the soundtrack to her TV comedy series soul opera titled "Niegbhour palava" which is coming out 2016 to 2017.
> In 2016 Samiyo drop his heavy club banging track titled "Sekosi" produced by Blac prince, mixed and mastered by Brain mix which has been making waves here and there from the streets to the clubs and still enjoying radio airplay till date.
> Then he followed it up with his soft dope RnB song titled "Tiffany" produced by saint uzi which gave him a management deal with a label named "kings entertainment" from the U.S
> Samiyo and the management are presently working on how the deal well come true soon this year while he is still under the imprint of a management here down in Nigeria named Edden rhythm records.
gists