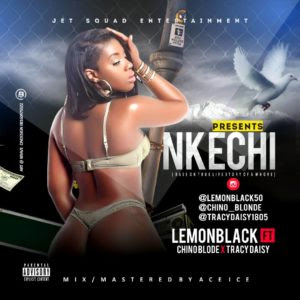 Timi W. George, popularly known as Lemon Black He is an outstanding rising star on the competitive Nigeria industry and for our information he is also a performing rapper, basically a Trap artiste from Ikebiri in Southern Ijaw local Government area of Bayelsa State, Nigeria.


He was born on the 7th of June 1984 precisely in the garden city of Port Harcourt, Rivers State of Nigeria where he also attended his primary & secondary school respectively. However He decided to further his educational studies thereby studying Chemical Engineering in the prestigious institution Niger Delta University Wilberforce Island Amasoma, Bayelsa State, where He actually obtained a Bachelor degree in Chemical Engineering but regardless of his area of specialization his love for music is pretty exceptional and nonnegotiable.

Lemon Black as he is known all over without been told has been in the musical industry for a long while but to shorten a long story recently He just released a reality song which is title #NigerDeltaResourceControl, a song with a very powerful message in view to liberate the good people of Niger delta region who basically for ages have been bearing the brunt of gross inequality despite been the current region feeding the entire Nigeria.
That is not all in his usual pattern of dropping reasonable songs, it will interest to know that just couple of days back Lemon Black has officially releases another mind blowing reality song of which he feature the likes of heavyweights Chino Blonde & Tracy Daisy. Hence the aforementioned song is written & produced based on a true life story of a whore, it is well composed with dope story lines, dope punch lines & a catchy hook.
To crown it all, good music is hard to find, so when we stumbled into one it is advisable to give tombs up.