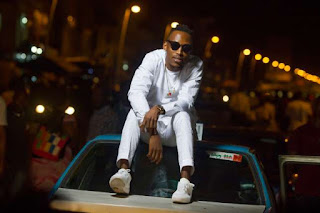 Mr 2kay is back with a new music. The Grafton Records singer has had a very interesting year. After rapping off visuals from his 2016 EP “Count it All Joy,” he is looking to move past that project and continue with his growth in Nigeria’s music space.

Since he released his EP, there has been a radical shift in the sounds dominating the Lagos music culture and seeping into other parts of Africa. The mid-tempo mellow vibes are in, and they are championed by numerous stars including Runtown, Tekno, and Davido. These have created a new structure for creating hits, with vibes and lyrics combining with deft production to create the ultimate Nigerian pop song of 2017.

Mr 2kay has had quite some success. Singles ‘Bubugaga’, ‘Ladder’, ‘Bad girl special’, ‘Moniegram’ and a few others have been underground hits which have placed him in prime position. And that’s where his new single 'Belema' comes in.

Produced by Micon, the song is a jam. Mr 2kay dips comfortably into urban Highlife, with old traditional melodies that overlap with modern guitars to provide a record that is captivating. The record draws on a lot of elements, utilizing syncopation as a tool to change the beat to four different patterns.

It’s a beautiful production, this one, and Mr 2kay harnesses all of his powers for this. It’s a mid-tempo song which can coast through you initially, but eventually grows and envelopes you with its synths, mellow drum patterns and more. For the dance floor, the relativity of the single will definitely be a favourite for rotation, and perhaps that is what the singer went for.

The video by Clarence Peters interprets it, with 2kay throwing himself stylishly through the motions surrounded by dancers and pretty women. It’s engaging to watch and beautiful when it flows with the music.

It’s past the mid-point for 2017, and the industry heating up towards the musical climax that the summer brings. On evidence of 'Belema', Mr 2kay will be right in the mix, staking his own claim with this record.
VIDEOS