TEKNO FIRES BACK AT STARBOY WIZKID 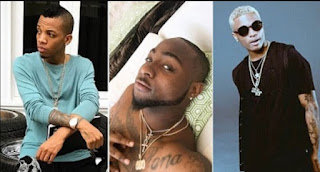 Tekno may have landed himself smack in the middle of the ongoing beef between Davido and Wizkid.

In case you missed it – Olamide dropped a new song “ Summer Body ” featuring Davido in which the DMW boss, Davido disses Wizkid on.
Here is what Davido said on the Song:-

“With our Yankee passport, Dem say we local. You better catch up, I go see you later,”

And Wizkid quickly fired back, saying:-

The clap back stirred major conversation on Twitter yesterday, with many people defending their favourite artiste.
But it seems Tekno has bought himself some chunk of the beef after he took to his Twitter to throw shots at unnamed persons for bragging about being the current ‘International’ star.

“Na just Time, soon we go know who international pass,” said the singer, adding, “I just dey look you. Just enjoy life and make Good music! If only we all celebrated each other.”

And that was not enough, Tekno took his shade up a notch by telling unknown persons to go for HIV test, and when a follower asked who he was dissing, peep Tekno’s response:-