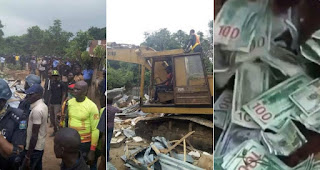 The alleged Badoo shrine belonging to 51-year-old millionaire and popular independent oil marketer, Alhaji Abayomi Alaka, of Alaka Petroleum, that was uncovered in Agbowa has been demolished by the Lagos state government.
Alhaji Abayomi Alaka who denied being a member of the dreaded Badoo cult group – was arrested in August at his Magodo residence in Lagos after police swung into action following the death of five family members who were brutally murdered by the cult group in Ikorodu area of Lagos state. 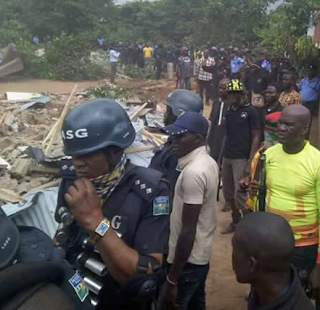 During the demolition, something strange reportedly happened. Dollars started to fly around while the fourth shrine was being demolished. This is according to a report by TVC.
See more photos of the hard currency below.
The demolition was led by the Lagos state Commissioner of Police, Edgal Imohimi, led a team of DSS, SSS and other security agents to demolish six shrines in Ikorodu, Lagos state.