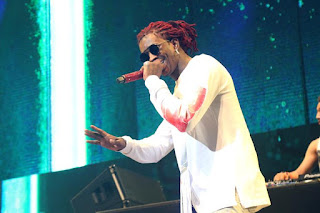 the past weekend and is now facing a felony drug

charge, and a misdemeanor for having tinted windows.

According to TMZ, the ATL rapper was picked up and

and booked on one count of marijuana possession.

In addition to that, he was also slapped with a charge for having

tinted front windows on his vehicle as well.

If we’re going by Thugger’s issues with the law this year than he
might have some luck on his side. Back in April, Thug got away
with another felony drug charge after his charges were dropped
after learning the raid on the rapper’s home in 2015 was done illegally
by police, hence why all the charges were thrown out.
In addition to that case, Thugger also got away with allegedly
slapping a woman outside an ATL nightclub back in April because
the judge didn’t believe there was enough evidence to support a battery
case against him. So all in all, he’s escaped two arrests & charges this
year scotch free, so hopefully third’s time a charge, but guess time will
only tell though. We’ll continue to keep you posted on the latest news moving forward.
In other related news, Young Thug is scheduled to be taking the stage at this
year’s STACKED Rolling Loud Festival in San Francisco. Joining him on stage at the
end of next month will be Lil Wayne, Schoolboy Q, Lil Uzi Vert, XXXTENTACION,
Kodak Black, 21 Savage, Dave East, Playboi Carti, and many more. Peep ticket
info right here if interesting in checking out Thugger live. He’s recently been
spotted in the studio working with Chance The Rapper, Future, and Lil Durkto
name just a few. So stay tuned, more from Thugger is on the way.