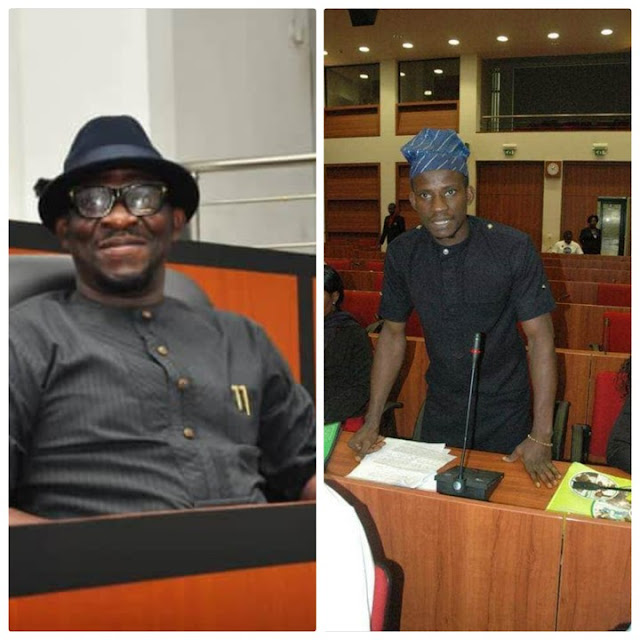 Hon. Wilson Ayakpo, member Bayelsa State House of Assembly Should be guided in his utterances, seek caution and refrain from disrespecting Bayelsa West Stakeholders in his mediocre attempt to please his affiliate leader from Bayelsa East.


Firstly let's purge ourselves of any preconceived definition of the concept of this article, and it was written on the basics of pure reasoning, respect for leaders and caution to a contemporary who is towing the line of self political destruction.

Hon. Wilson Ayakpo was inaugurated into the BSHA on the 6th of June 2019 to represent the fabulous characters of Ekeremor Constituency II in the Bayelsa State House Assembly, I was the Secretary of Ekeremor Community Unity forum that advocated that Ekeremor ward 8 should produce the next assembly member and we called on all political parties to key in, hence we took our advocacy to several High Personalities, and when this advocacy was achieved.
I, Comrade Atti J Moses pitched tent to support my Party's Candidate Hon. Grace Ekiottene and also donated a vehicle to support her candidature.

Hon. Wilson Ayakpo as a Young man is someone we the Ekeremor Youths love and respect but his recent utterances may lead him to self political destruction. The Ekeremor Local Government area Youths are known for their respect for constituted authorities and abide by agreement no matter what. Wilson Disrespected Sen. Heineken Lokpobiri who single handedly delivered him, calling him all sort of names because he wanted to display to Chief Timipre Marlin Sylva the Honourable Minister of Petroleum (State) that he is Loyal, “If you want to show  loyalty to your master you have to display intellectual capacity not by insulting your kinsmen".

Well, him insulting and disrespecting Sen. Heineken Lokpobiri is their party affairs even though Sen. Lokpobiri is a well respected leader not only in Ekeremor but Bayelsa West and no legitimate Youth of Ekeremor has gotten the effrontery to insult him the way Wilson is doing, someone who is an alien to Ekeremor politics no wonder he is saying there is no zoning formula because of his ambition of contesting the Senate elections after spending  over 365 unproductive days in office  as a Legislator with the obscurity surrounding a return ticket.

He should use his office as a Legislator to attract development to the Constituency, in his over One year in office he has not executed any project neither has he brought any blue print for well meaning persons to key in.

As Youths of Ekeremor LGA we will no longer tolerate his Incessant Insult on Leaders of the LGA and Senatorial District at large, his recent unguided utterances targeted at Bayelsa West Political Stakeholders and His Excellency Hon. Seriake Dickson who is a Chieftain of PDP and an Incoming Senator Bayelsa West calls for immediate reaction.

Hon. Seriake Dickson ambition does not disenfranchise anybody, hence anyone who is interested in contesting should do so without insulting anybody, all sons and daughters  of Bayelsa west has the political suffrage in the next Senatorial Bye Elections in Bayelsa west so there is no need for Mr. Wilson to panic over the endorsements that the former Governor is getting.

I would have called on his Leaders to caution him but he is currently leaderless because even the Chief Timipre Sylva that he is pledging false allegiance to, does not trust trust him because of his unstable character.