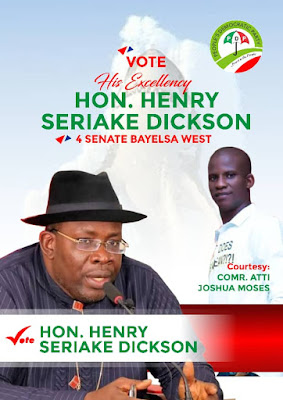 The Bedrock of Every Society is education and His Excellency Chief Henry Seriake Dickson the former Governor of Bayelsa State acknowledges that and this has prompted him to institute model Secondary Schools in all the 8 Local Government Areas with boarding facilities.

His Excellency also established and attracted more Higher Educational institutions in the state and the following are some of them sited in Bayelsa West.

Truly one will not be out of place if he or she ascerts that former Governor Dickson is the most education loving leader that the Senatorial District has gotten because he has laid the educational foundation for all Sagbama /Ekeremor People and Bayelsans at large including those yet to be born and its left for successive governments to capitalize on his imprints and advance on the structures and facilities on ground because educational development is a continuous process.

We as a people after perusing all candidates published by INEC as regards the district , has Unanimously Agreed at forums and strata that His excellency Chief Henry Seriake Dickson is the best man for the Job, he will add the Needed Coloration to the Nigerian Senate by being that Voice that the South South ,Niger Deltans ,Bayelsans and Bayelsa west People has always yearned for.

We also have this strong conviction, believe and Confirmed that he will bring and attracted the Needed Development to  Our Senatorial District.

Today Because of HSD Ijaw People living in  Ekeremor and Sagbama LGA can access ijaw Communities through roads, including those with Same aspiration. Its a free Contest and it will be a Victory for the Peoples Democratic Party.